Jahmark & the Soulshakers brought a roots reggae performance to the USU Wednesday that rallied a large crowd into harmony and musical fulfillment. The musically and ethnically diverse reggae band played longer than the usual one hour set allowed by noontime concert officials.

Common themes in reggae music were intertwined with a classically-jazzy upbeat style of roots reggae elements and sounds. 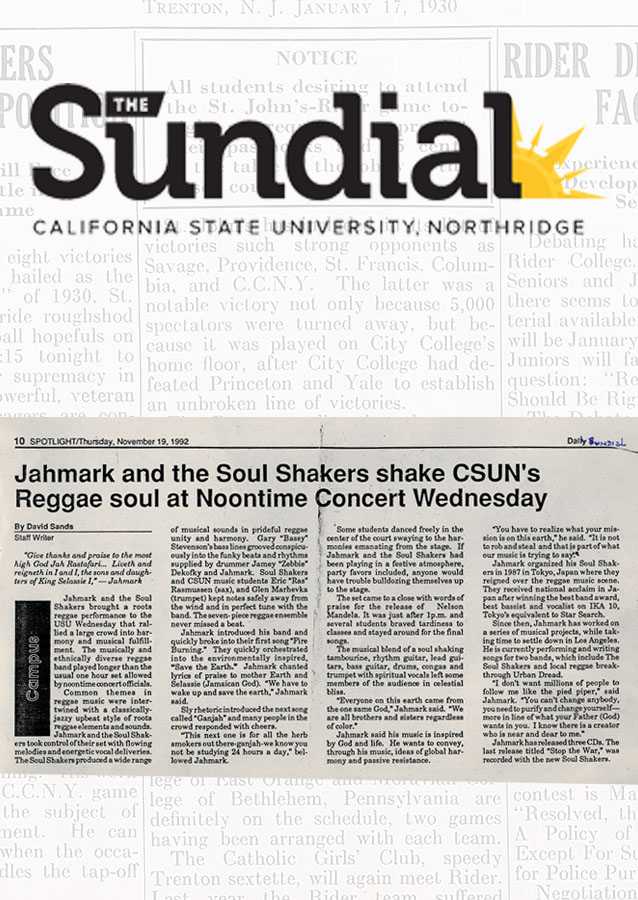 Jahmark introduced his band and quickly broke into their first song “Fire Burning.” They quickly orchestrated into the environmentally inspired, “Save the Earth.” Jahmark chanted lyrics of praise to mother Earth and Selassie (Jamaican God). “We have to wake up and save the earth,” Jahmark said.

Sly rhetoric introduced-the next song called “Ganjah” and many people in the crowd responded with cheers. “This next one is for all the herb smokers out there – ganjah! ganjah! ganjah! – we know you not be studying 24 hours a day,” bellowed Jahmark.

Some students danced freely in the center of the court swaying to the harmonies emanating from the stage. If Jahmark & the Soulshakers had been playing in a festive atmosphere, party favors included, anyone would have trouble bulldozing themselves up to the stage.

The set came to a close with words of praise for the release of Nelson Mandela. It was just after 1 p.m. and several students braved tardiness to classes and stayed around for the final songs.

The musical blend of a soul shaking tambourine, rhythm guitar, lead guitars, bass guitar, drums, congas and trumpet with spiritual vocals left some members of the audience in celestial bliss.

“Everyone on this earth came from the one same God,” Jahmark said. “We are all brothers and sisters regardless of color.”

Jahmark said his music is inspired by God and life. He wants to convey, through his music, ideas of global harmony and passive resistance.

“You have to realize what your mission is on this earth,” he said. “It is not to rob and steal and that is part of what our music is trying to say”

Jahmark organized his Soulshakers in 1987 in Tokyo, Japan where they reigned over the reggae music scene. They received national acclaim in Japan after winning the best band award, best bassist and vocalist on IKA 10, Tokyo’s equivalent to Star Search.

Since then, Jahmark has worked on a series of musical projects, while taking time to settle down in Los Angeles. He is currently performing and writing songs for two bands, which include The Soulshakers and local reggae breakthrough Urban Dread.

“I don’t want millions of people to follow me like the pied piper,” said Jahmark. “You can’t change anybody, you need to purify and change yourself–more in line of what your Father (God) wants in you. I know there is a creator who is near and dear to me.” Jahmark has released three CDs. The last release titled “Stop the War,” was recorded with the new Soulshakers.