Born in Kingston, Jamaica, Mark DaCosta, aka Jahmark Dan, is an accomplished singer, songwriter, musician, and painter. With one full-length album and contributions to four compilations already to his credit, Jahmark and his band, The Soulshakers, have released their U.S. debut album, Love Power. Jahmark and I visited one evening at his home in Woodland Hills, CA. Our discussion was informative, a truly spiritual reasoning session.

One of Jahmark’s musical influences while growing up was Bob Marley. He feels very fortunate to have had the opportunity to not only see brother Bob perform, but to talk with him on occasion. After moving with his family from Jamaica to Florida during the mid-’70s, Jahmark met Bob’s sister, Pearl Livingston, who introduced him to the Marley family. In fact, he was at the Marley’s Miami home the day Bob came back from that ill-fated the to New York. To this day, he keeps in contact with Pearl. 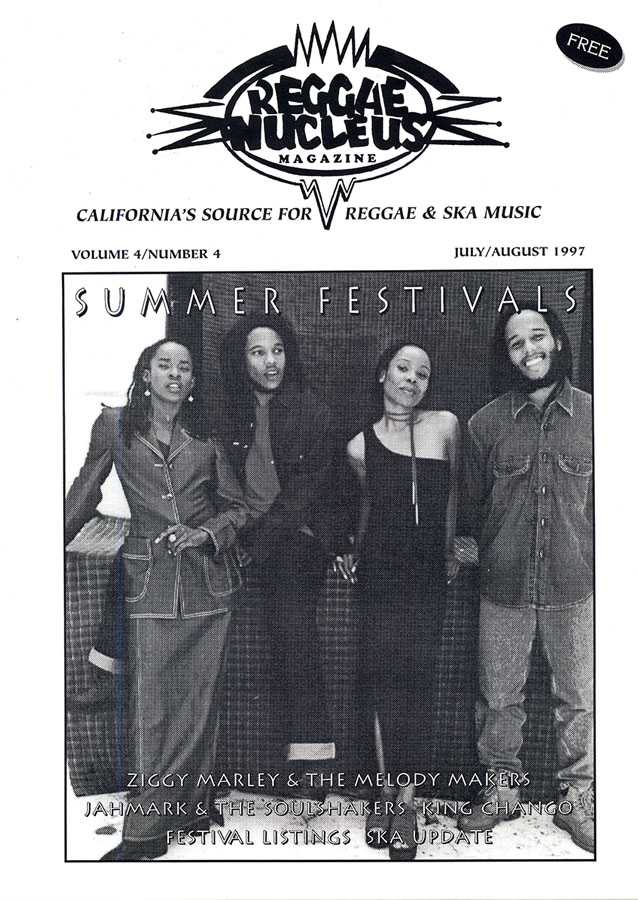 As far as how Jahmark began in reggae music: “My contact was listening and dancing to the music I heard coming from the sound systems. Whether you realize it or not, you become musical… it comes into your soul. I really started playing music when I came to America in the mid-’70s, when Jamaica was going through political changes.” Being the first time off the island for Jahmark, he was “not wise to the world, and felt dazed and bedazzled at times.” Naturally, it took a couple years to adjust. It was during this time that he “started to lick the chalice a lot more and was really getting into the Rastafarian doctrine and philosophy.” This was also when Jahmark began painting and songwriting. “A lot of my bredrens started calling me ‘Jahmark.’ They could see that I was touched.. .that Mark belonged to Jah.”

His two earliest songs written were “Misconception” and “Ganja Song,” while his first live performance was at Liberty City Cultural Center in 1980. As do most singers and musicians during their early years, Jahmark performed in a handful of bands – Sun Ray, Rockstone (backing the Mighty Diamonds, The Meditations, Josey Wales, and Brigadier Jerry), and Redemption Posse (backing Leroy Sibbles, Pablo Moses, and Tiger – the latter at Jamaica’s Sunsplash). On the evening when Redemption Posse backed Sibbles at SOB’S in New York, Jahmark met a promoter from Japan who offered to take the band to Japan.

Japan really impressed him. “The atmosphere was so much more relaxed in Japan. I painted a lot more.” Jahmark says of the Japanese and their culture, “It restored my faith in humanity knowing that not all people around the globe get caught up in the con. We are all born as innocent beings. Corruption is learned as you go along.” After he departed from Redemption Posse, he formed Jahmark & The Soulshakers which was comprised of Japanese musicians. Between 1989-91, they recorded three albums – compilations Unity and Jus’ Passin’ Thru, and their debut album Viva Mandela. “The musicians were very eager to learn. In a short period of time we were doing quite well, until that incident occurred.” After residing in Japan for nearly four years, Jahmark was faced with some “herb runnings” and spent three months at Nagoya Detention Center. Although unfortunate at the time, he believes, “On a deeper level, it happened for a reason.”

In late 1990, when he came to California, it was “start over business” for him. In a matter of weeks after watching Urban Dread perform, he joined forces with this California band. Itchin’ to play music and now able to pay bills, Jahmark feels, “It was a blessing from the most high for us to link-up.” “After noticing that they had their own idea of how reggae should sound and being accustomed to having female back-up singers, I decided to get the Soulshakers happening again.” He still plays with Urban Dread on occasion.

Their first performance was in 1992 at The Palomino opening for The Itals. Not wanting to play the nightclub scene, this well-rehearsed ten-piece hand set their sites on festivals. Among the festivals/venues to the Soulshakers’ credit are Reggae Jam On The Coast, San Diego Street Scene, Hemet’s Reggae Fest, Ventura Theatre, and Beach Fest & Chili Cook-Off, performing alongside such artists as Jimmy Cliff, Third World, Pato Banton, Burning Spear, Wailing Souls, The Wailers, Eek A Mouse, and Lucky Dube. “I didn’t want to be pegged as a ‘local’ band, even though we’re in California. But to someone in Japan, we’re international.”

In 1995, Jahmark contributed tracks for the gospel compilation, Reggae Worship, and reggae-tied Foreigner’s “I Want To Know What Love Is” for Thump’n Reggae Jamz. Last year, Jahmark hooked up with bredren Carl McGregor (bassist for Bamiki Bandula) who assisted him with the recording of Love Power. This U.S. debut album, released in early-’97 on Jahmark and friend Francisco Stitt’s Banana Boat label, features twelve well-written songs that will “shake people’s souls through hi-energy roots reggae.” Whether because of the lead track, “I Want To Know What Love Is,” the message to the children of the rainbow ,”Toy Gun,” or the acoustic “Thank You Lord,” Love Power is receiving rave reviews and is included on several playlists throughout the U.S.

This multi-talented, legend-in-the-making was among the acts at Hemet’s Reggae Fest in June (his second performance at this event). He and his band shared the stage with the Wailing Souls and Wendy Shaw & The Fully Fullwood Band. With such top-quality musicians as Zebbie on drums and Suba on guitar, a Soulshakers’ performance is not to be missed.

Unfortunately, space does not allow me to write about our entire conversation. But I would like to thank Jahmark for helping me to overstand Jamaica’s change of political power, drug infiltration, and the rise of popularity of dancehall. Maximum respect and forward on!