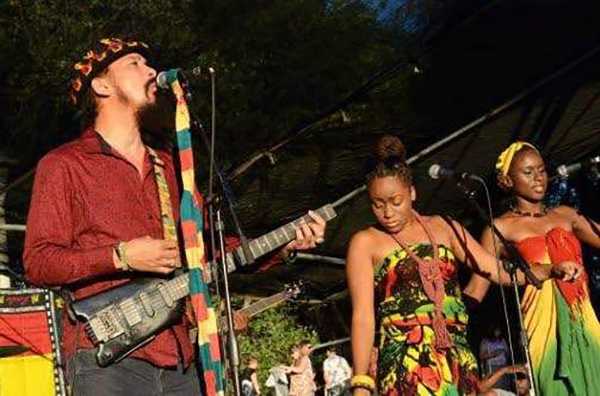 For nearly 40 years, Jahmark Tafari has carried the banner of Rasta and roots-reggae, an unapologetic disciple of the sound that made Marley, Tosh and Burning Spear legends. Recently, he has been embraced by an unlikely demographic.

A remix of Happiness, a song he recorded with his band The Soulshakers, went number one on the RapAttackLives.com chart, a respected college hip hop table operated by rap/hip hop veteran Nes “Nasty Nes” Rodriquez.

The Happiness remix features Targyt, a rapper whose parents are Jamaican. Jahmark told the Jamaica Observer that it was Rodriquez’s idea to freshen the song by adding a toast to make it more appealing to a hip, more commercial audience.

“He liked the song from the get-go in its original roots-reggae form. Even though his expertise is the promotion of hip hop music he said he liked the groove and the positive message — that it was a feel-good song, and he decided to add it to his RapAttackLives.com format,” Jahmark explained. “With the amount of gold and platinum albums hanging on his wall I figured he at least had some idea of what he was talking about, even though in the back of my mind I was saying to myself, ‘Hmm, straight-up roots- reggae song on a hip hop platform’.”

Rodriquez grew up in the burgeoning New York hip hop scene during the late 1970s. As a disc jockey, he was an influential figure in breaking that genre in Seattle in the 1980s, before moving to Southern California where he became an editor for Hits magazine.

Since 2002, Rodriquez has operated RapAttackLives.com, which tracks the momentum of hip hop acts and songs bubbling from the underground. According to Jahmark, topping the chart has done wonders for Happiness.

“I feel that it has, without a doubt, garnered a much larger listening audience outside of the traditional circle of reggae fans, and that can’t be a bad thing,” he said.

Happiness is the title track from Jahmark Tafari and The Soulshakers’ fifth album, which was released last April. It has 15 songs, deeply soaked in roots-reggae that Mark DaCosta (Jahmark’s real name) discovered in the 1970s.

Inspired by roots heavyweights like Marley, Burning Spear, Jacob Miller and U-Roy, Jahmark was born in Kingston. He was lead singer of the Redemption Posse, a group that competed in the 1986 Festival Song Contest; two years later, The Soulshakers was born.

After a stint in Japan, Jahmark moved to Southern California where he refashioned the band which currently has nine members. They perform throughout the United States west coast, particularly in their home region, and have released five albums to date.

Thirty-two years after they formed, Jahmark is thrilled he and The Soulshakers have finally made mainstream inroads.

“To top the college hip hop charts in the US means that wi reaching many youths here on a grassroots level who wouldn’t normally be listening to the messages being delivered through the vehicle of roots- reggae music. It give them an alternative way of viewing things; you know, a different frequency,” he said.